I used to have a standard password for the majority of my web accounts (with the exception of my mail and bank accounts, of course).

You know, despite having always known that it is indeed a very, very, very bad practice, I preferred to look the other way and accept the danger, embracing the commodity of not having to remember a lot of passwords. So, the other day it happened what was meant to happen, and while I was login to my mail account a Pidgin window suddenly popped up out of nowhere making my password not to be a secret anymore. Actually my mail password was not the aforementioned standard one, so replacing it was easy as cake, but the situation made me thought about how difficult and boring, if possible at all, would be to change the password of those accounts that share it.

Anyway, no harm had been done and it seemed like the perfect time for me to query Google a little bit about how could I manage my passwords more efficiently, looking for something that allows to:

LastPass: a web app to rule them all

LastPass is a service that allows you to store your passwords in an external and secure server and access them using your browser, making them available in any computer you have. The password database is signed and encrypted with a password of your choice, making it impossible for another person to hack the LastPass servers and gain access to your secret information.

LastPass can be used on any operating system, as there are not only extensions for the most used web browsers (Internet Explorer, Mozilla Firefox, Google Chrome and Opera) but it is also possible to access your password vault from the LastPass website, though this is by far not as powerful as using an official extension, which allows you to automatically fill forms when you enter a stored site.

There are two interesting features included with the binary browser extension, like a simple secure password generator. It is possible to customize some basic options like the set of used characters and the length of the new key. The One Time Password functionality makes it more secure to log-in on public computers that we do not trust, as it will make potential key-loggers useless.

LastPass is available at no charge, but there is also the option to subscribe (1$/month) to get access to the complete set of features. The free version does not support mobile devices, practically forcing you to subscribe if you own a smartphone,

There are a couple things I don’t like about it, and the actual reason why I am not finally using it:

All in all, LastPass is a great application and you should definitely consider it if your intention is to use it basically to keep your web accounts passwords safe and easy to reach and you don’t care about mobile devices support, which I guess fits the needs of most of the people.

Having tried (and liked) LastPass, I wanted to check for the existence of a similar application but this time desktop based, so I would not depend on an external service or Internet connection. I am a GNU/Linux user with a Windows 7 installation for gaming, so a cross platform solution would be awesome, but not mandatory.

I took a peek into the ArchLinux repositories, looking for packages with the keyword password in their descriptions. Some of them I knew from previous attempts of installing and using a password manager like Gnome Revelation, which I used to use until development stopped back in 2007.

I finally ended up installing KeepassX as it is supported by ArchLinux developers (ie, not in the AUR) and has a very interesting set of features.

In order to talk about KeePassX, I should introduce you KeePass before. KeePass is an open source Microsoft Windows password manager written in the .NET language, featuring strong security and auto-type, the later meaning that your passwords will be filled in forms by pressing a customizable key. Isn’t that cool?

KeePassX is the open source version of the former, fully compatible with KeePass 1.x databases. Named KeePass/L in the beginning (L standing for Linux), it was renamed once it became a cross platform application (supporting Microsoft Windows and OS X as well).

KeePassX is a graphical application with minimal dependencies (Qt, libxtst) that creates and manages an encrypted password database that is stored as a single file in the system. The database uses a powerful enough encryption so that it is virtually impossible to hack it without knowing the password.

KeePassX is distributed as a zip file for the Windows platform, an installer for OS X and several different packages for Linux, though it should be available in your distribution package system.

Once you install it, you just create a new database and start adding passwords. Take your time, though, to configure the program a little bit. My recommendation is to tune it so that it starts minimized and locked, and to be sent to tray when the close button is pressed. That, as well as adding it to the list of programs executed when your system starts, will make your passwords available within a couple of clicks. Also, consider checking the Automatically save database after every change and the automatic locking options. 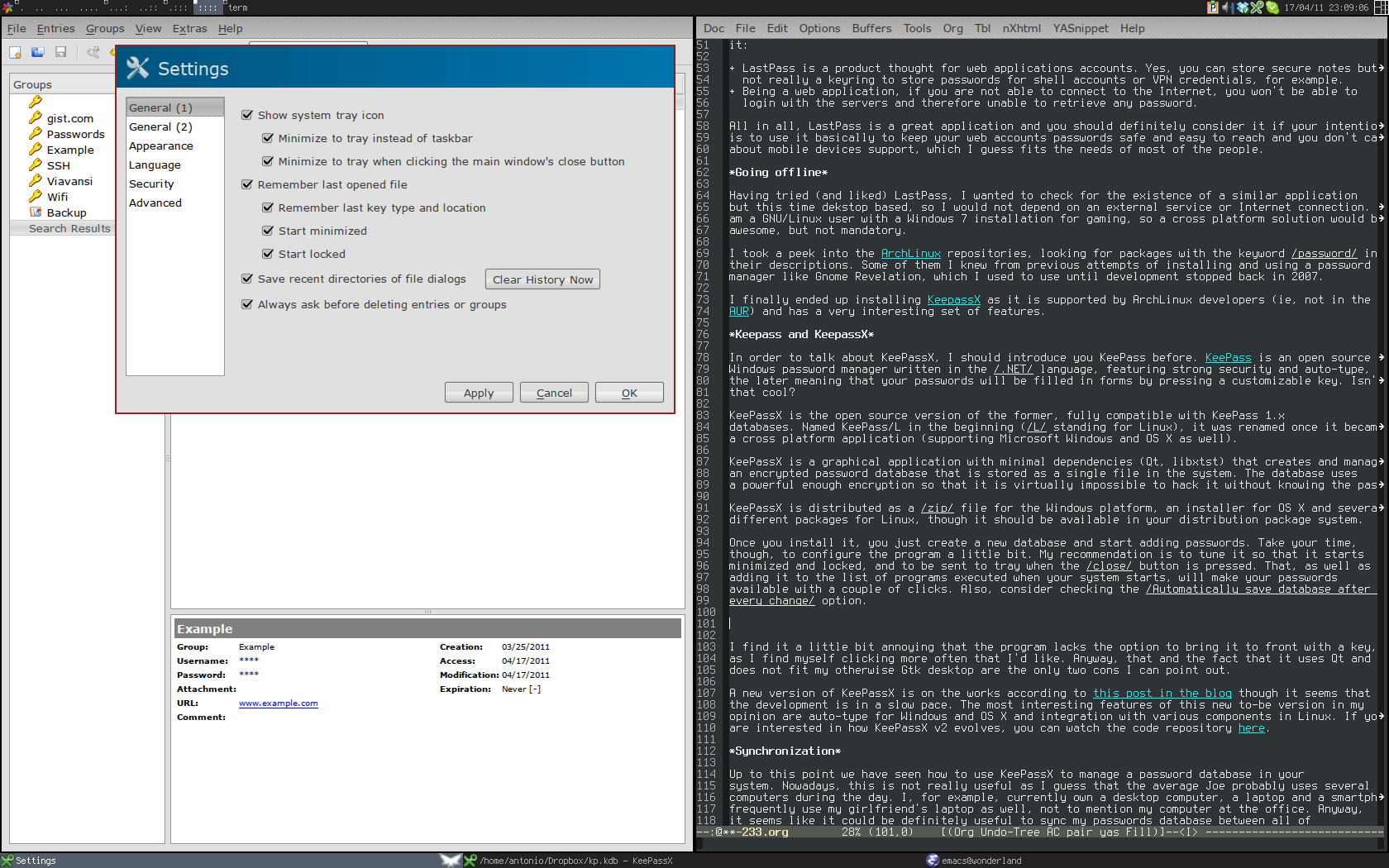 As you can see in the screenshot below once you find the password you are looking for there are some shortcuts that make it easy to fill web forms.

The most powerful option is definitely Perform Auto-Type, which will insert both the user name and password automatically (currently only on Linux). There is even a way to configure a global shortcut key under the settings that will perform the auto typing based on the window title, even if KeePassX is minimized. It is possible to configure both the window title and the auto-type sequence, as shown in the following screenshot: 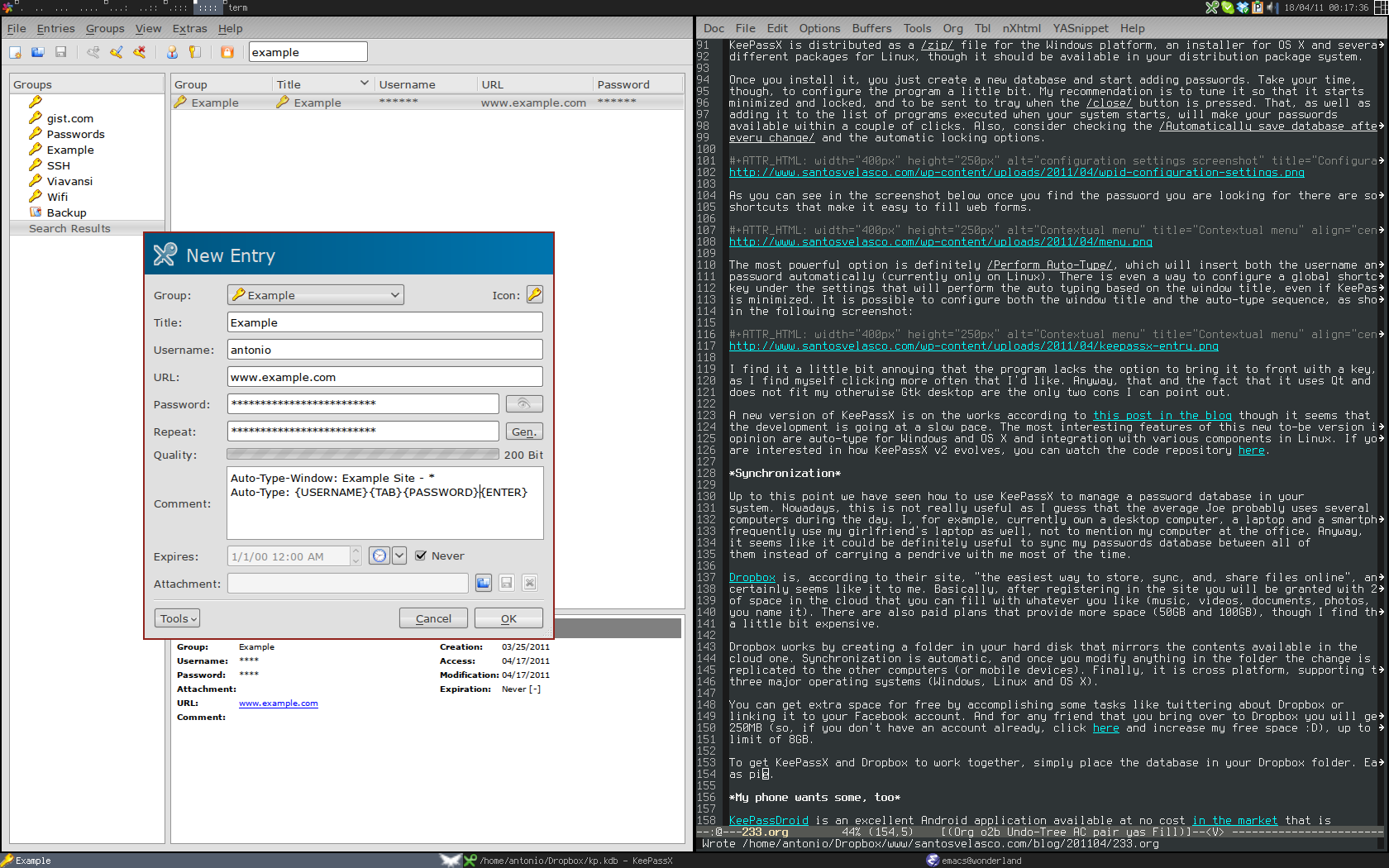 I find it a little bit annoying that the program lacks the option to bring it to front with a key, as I find myself clicking more often that I’d like. Anyway, that and the fact that it uses Qt and does not fit my otherwise Gtk desktop are the only two cons I can point out.

A new version of KeePassX is on the works according to this post in the blog though it seems that the development is going at a slow pace. The most interesting features of this new to-be version in my opinion are auto-type for Windows and OS X and integration with various components in Linux. If you are interested in how KeePassX v2 evolves, you can watch the code repository here.

Up to this point we have seen how to use KeePassX to manage a password database in your system. Nowadays, this is not really useful as I guess that the average Joe probably uses several computers during the day. I, for example, currently own a desktop computer, a laptop and a smartphone, but I frequently use my girlfriend’s laptop as well, not to mention my computer at the office. Anyway, it seems like it could be definitely useful to sync my passwords database between all of them instead of carrying a pendrive with me most of the time.

Dropbox is, according to their site, “the easiest way to store, sync, and, share files online”, and it certainly seems like it to me. Basically, after registering in the site you will be granted with 2GB of space in the cloud that you can fill with whatever you like (music, videos, documents, photos, you name it). There are also paid plans that provide more space (50GB and 100GB), though I find them a little bit expensive.

Dropbox works by creating a folder in your hard disk that mirrors the contents available in the cloud one. Synchronization is automatic, and once you modify anything in the folder the change is replicated to the other computers (or mobile devices). Finally, it is cross platform, supporting the three major operating systems (Windows, Linux and OS X).

You can get extra space for free by accomplishing some tasks like twittering about Dropbox or linking it to your Facebook account. And for any friend that you bring over to Dropbox you will get 250MB (so, if you don’t have an account already, click here and increase my free space :D), up to a limit of 8GB.

To get KeePassX and Dropbox to work together, simply place the database in your Dropbox folder. Easy as pie.

My phone wants some, too

KeePassDroid is an excellent Android application available at no cost in the market that is able to read and write KeePass and KeePassX password databases. By combining it with the official Dropbox Android application you will never be locked out any website, as synchronization between your computers and your phone is taken care of by the cloud based service.

Its use is really straightforward, as you only need to select the database file and type the master password to get the complete list of credentials ordered by groups. You can search for a specific entry using the menu button and copy the credentials to the clipboard, making it really easy to login using the Android browser.

If I have to point out defects, I’d say that I find it a little bit lacking in terms of user interface. Also, it would be awesome (though I don’t know if it is possible at all) if KeePassDroid was automatically launched from the very same browser when a password needs to be typed.

There are also alternatives for the iPhone like iKeePass or MyKeePass, and also applications for Windows Phone 7 (7Pass). Other mobile systems like BlackBerry or Symbian also have applications able to interact with KeePass databases (see http://www.keepass.info/download.html for an up-to-date list).

Looks nice, but I am a terminal lover nerd

For those of us out there command line lovers, there is a program called kpcli which makes it possible to interact with the password database, what can be useful on those occassions you lack a graphical environment (say an ssh connection, for example). In ArchLinux, kpcli is available in the AUR.

And for the extra paranoid out there, what about getting enhanced security by creating an encrypted volume in your Dropbox folder? TrueCrypt on-the-fly capabilities make it possible to add an extra layer of security without a remarkable impact in performance. A tutorial on how to perform this is out of the scope of the post, but feel free to check this link out for more information on how it can be done.